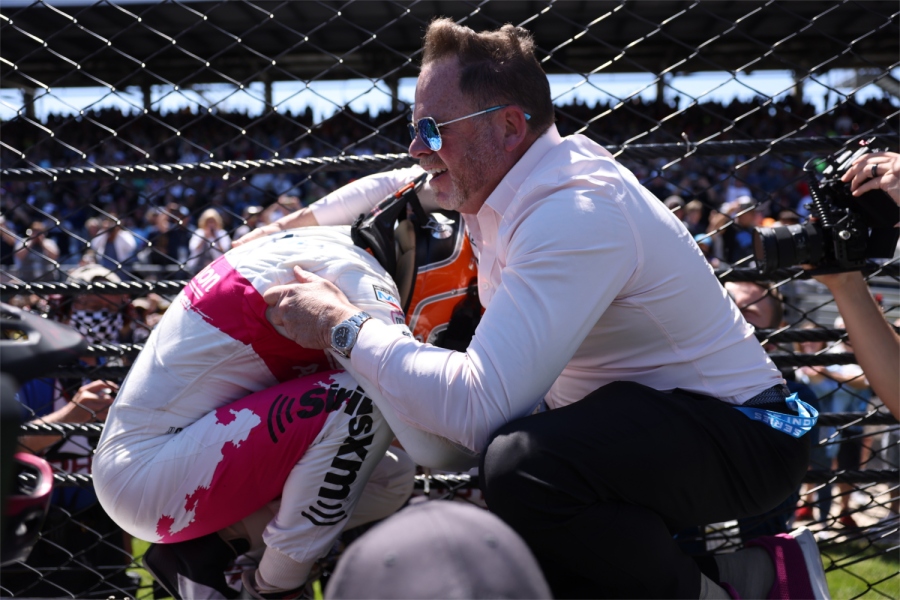 As has been talked about and written about extensively, the 105th Running of the Indianapolis 500 was truly a battle of generations for the current soul of Indy car racing. And once again, the Indianapolis 500 proved that experience tends to rule the day when 46 year-old Helio Castroneves finally joined the most exclusive club in all of motorsports and won his fourth Memorial Day Classic.

Castroneves become the first one-off driver to win since Dan Wheldon ten years ago by holding off two representatives of the youngest generation in Ganassi’s Alex Palou and Arrow McLaren SP’s Pato O’Ward. In a thrilling fight to the end, Helio used his experience, notably from gut-wrenching runner up finishes in 2014 and 2017, to know exactly what move to make and when to make it. It was a battle that will likely go down with the classics in race history.

The story of Helio Castroneves has been well documented over the years. Many people will say he was lucky to step into his career destiny when he took the ride that had originally been destined for the late Greg Moore. There might be an element of truth to that, but no one builds the career Helio has built on luck alone and without being extremely talented. Coming to Indianapolis in 2001 as a novice and raw 26-year old rookie, Helio immediately took to the 2.5-mile oval, winning his first two races and finishing second by 0.3 seconds in 2003 to his teammate in his quest to become the first driver to win three races in a row.

After another victory in 2009, it seemed a foregone conclusion that Helio would soon join the elite club of four-time winners and perhaps even become the first to win the race five times. But year after year, Helio continued to come up short. The most heart-breaking attempt came in 2014 in his epic battle with Ryan Hunter-Reay. Castroneves did everything he could possibly do to win that race short of actually forcing RHR onto the Turn 3 warm-up lane. In the end, he just got beat in what still stands as the second closest finish in race history.

Castroneves again came up agonizingly short in 2017 when he and Takuma Sato battled all the way to the checkered flag. Helio tried but just didn’t have the horsepower to keep up with Sato’s Honda engine that day and finished a scant 0.20 seconds in arrears.

Despite a fourth-place finish in the 2017 season that saw Top 10 finishes in 16 out of 17 events and nine Top 5 finishes, Castroneves was cut loose from Team Penske’s IndyCar program at the end of the season and relegated to their sports car program for 2018. He continued to have one-off rides with Penske in the Indianapolis 500 from 2018 to 2020 but just never seemed to click with the team once he was out of a full-season ride. A crash in the 2018 left Helio begging Roger Penske to continue with one-off rides, but the magic just seemed gone. He just didn’t drive like his old self anymore.

Castroneves let it be well-known that his choice to step away from a full-time IndyCar ride was not his. Helio felt like he still had unfinished business left to face – notably the elusive fourth Indianapolis victory and a season-long IndyCar championship. Helio finally won his first championship in top-level racing as a part of Team Penske’s entry in the 2020 IMSA WeatherTech SportsCar Championship, but that would be Helio’s swan song with Team Penske. After 21 years with the team, Castroneves was finally let go from the team and left to find his own new way.

Michael Shank first tried to enter IndyCar racing in 2012 as a team owner. A former driver himself who made a single IndyCar start at Las Vegas in 1997, Shank already had an established and successful team in sports car racing but wanted to move back to his open-wheel roots. Shank purchased two new Dallara DW-12 chassis prior to the 2012 IndyCar season but was unable to secure a competitive engine from Honda or Chevrolet in spite of having a full-funding sponsor. It was a terrible black eye for IndyCar racing and would have been enough to cause most prospective owners to give IndyCar a giant middle finger.

However, Shank never once complained. He sold off his new and unused equipment and went back to sports car racing. It took several more years, but Shank finally got his foot in the door with IndyCar racing in 2017 when he partnered with Andretti Autosport to run Jack Harvey in the Indianapolis 500. (He was originally supposed to run Stefan Wilson in that race, but we’ll ignore those details for the purposes of this story.) In an interview on Trackside with Curt Cavin and Kevin Lee in the run up to that event, Michael Shank gave a wonderful interview where he discussed his previous 2012 situation in depth. Shank never once spoke down about the engine manufacturers or pouted about his situation. He was open and honest how disappointing it was, but it only made him want to work that much harder. Not really knowing much about Michael himself to that point, I remember being exceptionally impressed with him as a person and really starting to root for him from that point on.

Following his toe-dip in 2017, Shank took his partnership to Schmidt Peterson Motorsports for 2018, committing to running Jack Harvey in six races that season, including the Indianapolis 500. Results were elusive in that first season, but Shank committed even further for 2019 by expanding their schedule to 10 races. A break-through third-place finish for Harvey at the INDYCAR Grand Prix at Indianapolis was a feel-good story and showed the potential the team had.

By 2020, Michael Shank committed his team to a full-time entry in the NTT IndyCar Series, buoyed by additional investments by former SiriusXM CEO Jim Meyer. Though the Wikipedia entry for the rebranded Meyer Shank Racing might not show impressive results with a final season standing of 16th, the team made massive improvements throughout the season and showed they were ready to compete. Six Top 10 finishes over the final ten races were an indication the team was continuing to get better week after week.

With Helio Castroneves out of a job after the 2020 season and Meyer Shank Racing looking to add a second car for selected events in 2021, Michael Shank felt Helio still had good racing days ahead of him, having been able to watch him race firsthand in the IMSA series. Shank put Castroneves into the #06 car for the 2021 Indianapolis 500, and the rest is now history.

It seems fitting and such a great story that these two men, both of whom had been kicked and treated unfairly by the system, found their way together and produced a win for the ages at 16th and Georgetown. Michael Shank now joins Bryan Herta as a car owner who scored his team’s first IndyCar win at the Indianapolis 500. And with Helio’s fourth win being such a history-making endeavor, there is a good chance the two will be forever linked in the hindsight of racing history. And they should be. These are two men who overcame the odds and persevered to winning auto racing’s highest prize. It’s hard to imagine anyone isn’t happy for both of them this morning. (Except maybe Roger Penske. If you saw him greet Helio Castroneves in Victory Lane, the greeting wasn’t quite as warm as in Helio’s three previous victories. Don’t think for a minute Roger didn’t want to own that piece of history like he does Rick Mears and Big Al’s four Indianapolis wins.)

Speaking of history, I really hope to find out soon that INDYCAR, the Indianapolis Motor Speedway, or the IMS Museum is purchasing Helio’s winning car and all the original pieces from Meyer Shank Racing for permanent ownership and at least periodic display at the IMS Museum. This is a very significant car in Indianapolis 500 and should be preserved as such. With the IMS Museum being a non-profit entity, it seems unlikely, but maybe some generous benefactor will make it happen. Anyone got a spare $750k laying around?

Leave a Reply to Will Schilling Cancel reply