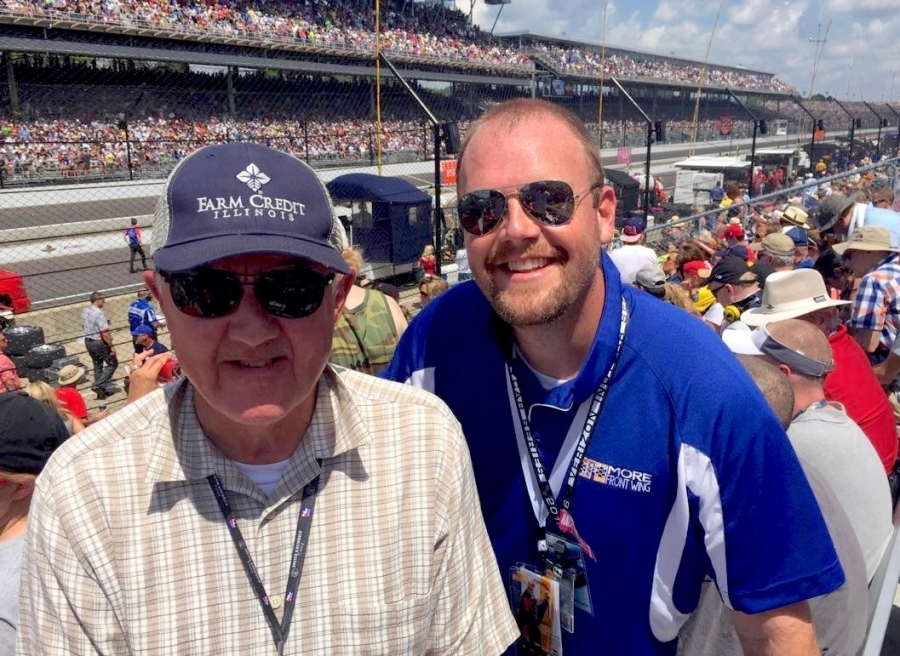 While many things have come and gone at the Indianapolis Motor Speedway since 1954, one thing that has been nearly constant is my dad’s presence at the annual running of the Indianapolis 500.  Having missed only the 1965 race due to his military service, Dad will be attending his 65th race this weekend.  In declining health and not able to get around the massive Speedway as easily as before, Dad acknowledges that this weekend’s race is most likely the last race he will be able to attend.

Dad’s first race in 1954 came only days after he completed his freshman year at Springfield’s (IL) Lanphier High School.  Four years later, he would graduate high school and immediately hop in the car to drive to Indianapolis for the 1958 edition of the Greatest Spectacle in Racing, arriving late in the evening before he saw Jimmy Bryan win a tragic race.

In those early years, Dad attended the race with his father, Jim, and his aunt, Aunt Bobby.  Even though it was a vastly different time, many of the traditions that Dad and I have carried on to this day were formed in those early years.  The United States interstate highway system was born only a couple years after Dad’s first race, and it would be several more years before Interstates 72 and 74 eventually connected Springfield and Indianapolis.  Before then, the direct link between the two cities was US Route 36, which passes through Springfield and Decatur, through the farming communities in East Central Illinois of Tuscola, Newman, and Chrisman, then winds through the Western Indiana towns of Montzuma, Rockville, and Danville, before entering Indianapolis as Rockville Road.  To this day, we continue to take that old road whenever we can.

For accommodations, Dad, Grandpa, and Aunt Bobby camped at the Kramer home located at Crawfordsville Road and Fisher Avenue.  Usually they would sleep in their car, but sometimes it would be sleeping bags or even in the Kramer’s garage.

My grandpa and Dad’s aunt stopped going after the forgettable 1973 race, and Dad would attend the time trials and race solo until my oldest brother first attended the time trials in 1983.  It wasn’t until 1988 that Dad had a companion for race weekend.  By that time, Dad was attending his 34th race.  Though I haven’t missed a race since 1988, it won’t be until 2020 that I hit just half of dad’s race count.

Dad has enjoyed other forms of racing over the years, but his real love has always been Indianapolis.  Other than races at the Springfield Mile and Shaheen’s Little Springfield, I’m not sure Dad has been to any other major races besides one IndyCar race at Chicagoland Speedway around 2006.  However, he always kept up with the series via National Speed Sport News, to which he has had a subscription since his youngest days as a fan, and an annual Month-of-May subscription to the Indianapolis Star.  He has never jumped on the technology wagon though, and as far as I know, he has never used a computer in his life, so keeping up with the modern instant news isn’t how he rolls.

When I think back on the changes I have seen at the Indianapolis Motor Speedway since 1988, they have realistically been pretty minimal.  We still have the same aerodynamic-dependent, ground effects cars that we had 31 years ago.  The engines have changed from 2.65L turbocharged engines to 4.0L normally aspirated engines and back to 2.2L turbocharged engines again.  Really, that’s about it though.

When I think back on the changes that Dad has seen in his 65 years at the Indianapolis Motor Speedway, it is simply staggering.  Changes have been to engines, tires, cars, teams, drivers, and of course the facility itself.  There is really almost nothing the same as when dad first set foot in the Speedway in 1954.  The cars of his first year were in the midst of evolution having recently begun the transition from upright championship cars to roadsters.  The engines only had four cylinders and were still in the front of the car, the tires were skinny, wings and ground effects weren’t even dreamt of yet, foreign drivers were few and far between, the front straight was still mostly exposed bricks, and the track’s second pagoda (built in 1925) stood where the Master Control Tower would soon stand before it too was eventually replaced by the current Pagoda.

It was a different era in 1954.  The drivers were brawny, larger than life, and very mortal.  Not a single driver from that race is living still today, and an astonishing 13 of the 33 starters would be fatally injured in auto racing.  Many were lost on the treacherous dirt tracks like Langhorn, Salem, and Phoenix, but Indianapolis was not immune.  Just from the 1954 starting lineup alone, Bill Vukovich, Manny Ayulo, Pat O’Connor, and Tony Bettenhausen would lose their lives on the 2.5-mile big oval.  It was tragic but it was taken as part of the sport.

Dad was devastated hearing the news in person that Bill Vukovich had been fatally injured in 1955, but it was just part of the constant change at Indianapolis.  Dad was there before AJ was AJ and before Mario was Mario.  He watched the rear engine cars come creeping in in 1961 before completely taking over within just a few years.  He smelled the smoke and burning gasoline as two drivers perished in 1964.  He watched as Parnelli broke the 150-mph barrier and saw Tom Sneva break the 200-mph barrier.  He remembers a time when Andy Granatelli and Leader Cards were the major teams, before Roger Penske’s name was ever known.  He saw AJ Foyt win all four of his races.  Ditto Al Unser and Rick Mears.  He watched Gordon Johncock win the closest race ever and then saw Al Unser, Jr. win one that was even closer.  He was ecstatic when Sam Hornish won over Marco Andretti on a last-lap pass and was nearly in tears when Tony Kanaan finally broke through in 2013.  Most everything about the Indianapolis 500 and the Indianapolis Motor Speedway has changed since 1954, but Dad’s presence there has been a constant.

While many things have changed, many have also stayed the same.  Some of our family traditions, which I wrote about a couple weeks ago, mirror those of many other families and continue to this day.  Other family traditions have faded over the years but not without the indelible memories of their time.  Before I was in college, Dad did not want to take me out of school for the first weekend of qualifying, so we never got into Indianapolis until Friday night.  For dinner, it was always the MCL Cafeteria in the Speedway Shopping Center.  Our hotel was the Holiday Inn in Lebanon that used to sit on the southeast corner of I-65 and SR 39.  The hotel was razed about a decade ago, but I still have many years of memories of swimming in the Holidome and playing on the playground there.

During race weekend, our hotel was the Ramada Inn in Danville, IL, only a few hundred feet from the Indiana state line on I-74.  Dad liked this hotel because they didn’t raise their rates or require a three-night minimum stay for race weekend.  Dinner on Saturday evening was George’s Buffet in Danville (which I believe closed between the 1991 and 1992 races), and Sunday evening dinner was at the motel while watching the ABC race re-broadcast.  It wasn’t until 1999 that we would spend our first Saturday before the 500 in Indianapolis.

But as it eventually does to all, time has caught up to Dad, and while he hasn’t shut the door on returning to the Indianapolis 500, he has told me recently that he believes this will indeed be his final race to attend.  It is not out of a lack of desire or a loss of love for the event though.  Through the countless changes seen over the past 65 years, Dad’s love for the race is just as strong as ever.  However, it is more difficult for him to get around the facility now that he is in his upper 70s and other health problems have him worried that the enjoyment might be greatly reduced.

It is sad knowing this could very well be my final time to attend the Indianapolis 500 with Dad.  Since I was seven years old, it’s been our thing.  Dad worked second shift (2:00pm to 11:00pm) at the post office my entire childhood, so I didn’t get to see him much during the week other than mornings before school.  He did everything he could to spend time with my brothers and me on the weekends though, and I don’t remember him missing very many soccer and baseball games that were on Saturdays.

But our two trips to Indianapolis every May (along with another trip we would often take to visit the city annually on Martin Luther King, Jr. weekend) were our time together.  We talked about it for months in advance, usually not long after the previous race ended.  We used to watch old races on VHS together, much to the chagrin of my brothers and mom.  Indianapolis was what always brought Dad and me together.  I don’t know how, but he instilled the love for the event in me from an early age.

My dad was 32 years old when his dad attended his last race.  This year I will be 38 when I likely attend my last race with my dad.  There will be a lot of memories to make this year, and I know I’m going to want to enjoy them each a little more than I have in recent years.  I can’t deny that I have taken several of the last few years with him for granted, especially since my “media” responsibilities began in 2010.  But I know he doesn’t take these days and these years for granted.  It is still a major part of his life that he admits he is not looking forward to being without.

So if you happen to see me this weekend and I’m with my dad, say hi to us and wish him well in his attendance this year.  Maybe a year from now Dad will believe he is still capable of attending the race, and I’ll go through this whole ritual again.  That would be just fine.  Even so, I will still take special notes in my mind this year and try to remember every moment just a bit more.  I would encourage you to do likewise if you’re attending with a longtime friend or family member.

7 thoughts on “After 65 races at IMS, fan prepares to say goodbye”